A different perspective is one of the hardest things to obtain.

By: Arya Jha about her volunteer work in Nepal.

A different perspective is one of the hardest things to obtain. Nature and nurture both skew how each individual thinks and behaves. Growing up in a privileged town, under an air conditioned roof, with all the latest clothes and gadgets is a recipe for a narrow outlook in life. There’s no reason for this person to know what others are facing even a couple miles away when they don’t have to deal with it themselves.

Acquiring a new perception was the hardest first step for me when I thought about volunteering in Nepal. I wasn’t completely oblivious to everything happening in my father’s home country as I visited almost every year. I would enter the home he was born in, after petting the goats on the way in, and complain about the cracks in the walls and the uneven floors that disobeyed the mason’s leveler. I would think to myself, my dad was so poor, how awful! What I didn’t know when I was younger was that the majority of people had it much worse. And while my father did indeed grow up below the poverty line, there are so many subcategories of the impoverished and I felt that I needed to educate myself.

It was not perhaps until I met Dale Tamang at the Voice of Children (VOC) drop-in center in Kathmandu last June that I really gained perspective. I had volunteered in the capital for the past two years as well, and while all my experiences were eye-opening, none compared to the rawness of my time at VOC.

Dale was the first of thirty-six boys I met during my one-week stint over the summer, and he is one of the few that I still think about on a daily basis. Upon entering the three story building where homeless boys would first come after being picked up by the police, I saw him, curled up underneath the coffee table. He stuck his head out, just to inform himself of who had just entered the room. Probably knowing that I was not one of the usual volunteers, he slid out, and walked over to me. He looked no more than eight years old. Traumatized from his days on the street after the loss of his family, he refused to eat meals, play board games with the other boys, and communicate with his teachers. I spent hours trying to earn his trust. And somehow, through this process, I became his anchor, his human bridge to the beginning of a normal life. In my presence, despite our language barrier (he spoke Tamang), he tried out new actions and received positively reinforcing responses. He rebuilt himself, just as Kathmandu slowly repaired its bridges, roads, and homes after the destructive earthquake. And, while Dale found a new home inside his own skin, I realized how Nepal has served as my own anchor.

Additionally, in this visit I was fortunate enough to do something completely different. Tulsi Uncle arranged for me to deliver some school supplies to St. Xavier’s Social Service Center through FONNJ and The Asha Project. Girls and boys—some in wheelchairs and others in crutches—sat in the pavilion where we were welcomed. They applauded with a twinkle in the eyes when they realized why we were there. They sat, listening attentively to every word I said when asked to speak about why I’m doing what I’m doing. It was a surreal experience that further contributed to my new perspective that I was working so hard to achieve.

Nepal used to mean a simple visit to my grandparents—a chance to pet the goats. Then it became an opportunity to apply my tech skills for earthquake disaster relief. Now, Nepal has become a place of transformative encounter. Nurturing the homeless boys of Kathmandu and working with those who seek guidance, I found a new home in Nepal. 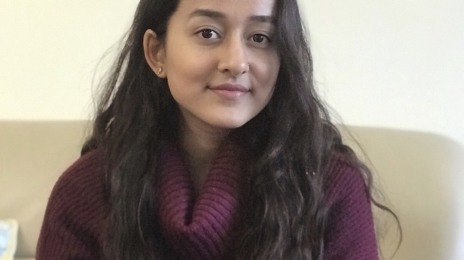 First Dashain away from Nepal, the best time to feel homesick. The only good I could think about this year's Dashain was thankfully, it was on a Saturday. I opened my eyes the Dashain morning and as I got off my bed, I remembered the times when I used to wake up with the aroma of fresh fini and sel roti spreading through the house. I’d be so excited to show-off my newly bought clothes and receive my dakshina. I think it probably is every Nepali’s favorite time of the year.

Dashain feels empty when you don’t get to put tika with the same people you used to, every year. When the entire family celebrates back in Nepal, sends you pictures and skypes with you, and you don’t really feel those festive vibes in this foreign land. I was so jealous of the people back in Nepal, who got their long Dashain vacation and got to travel to their hometowns and celebrated with their families and loved ones. Scrolling through Facebook and Instagram certainly did not help.

Dashain is not just about “khasi ko masu” or “sel roti” or “loads of dakshina”. Most importantly, it is about being with your family and spending quality time together, exchanging stories and laughters. I missed my grandfather’s long ashirwad as he named all the Gods he could possibly remember. I missed my cousins with whom, at the end of the day, I’d count all the money we’d have gotten and see who received the most. I missed my aunt’s handmade “aloo ko achar”, which I could never get enough of.

Early in the morning, I got nostalgic and wished I was back in Nepal having my morning tea with sel roti. I really didn’t have any expectations for this Dashain out in this faraway land. The plan for the day was to visit some Nepali families and celebrate with them, which to be honest, I wasn’t very excited about. But to my surprise, people despite their busy schedule, celebrated the festival so beautifully and with all the required rituals. I could see women dressed in their traditional attires, everyone’s forehead filled with akchheta and different food items filled the large table with the tastes that reminded me of home.

As I experienced my first Dashain in America, I came to know that the Nepalese living here know how important our culture and traditions are, and value it even more, as they are away from home. The Nepali communities had even hosted Dashain parties for all the Nepalese to join in and celebrate their grandest festival, together. And it made me feel so proud to see their Dashain spirit as they presented performances depicting our diverse culture.

Maintaining your culture when moving to another country can be difficult, in particular, if you've been trying to immerse yourself into the new culture to adjust to your new community. But it's important to know that just because you're adapting to a new culture doesn't mean you need to let go of your own. Balancing both worlds is important because your culture and traditions define who you are, and that is and always should be a part of you. Even though we’re miles and miles away from home, I hope that by teaching younger ones of Nepal’s traditions, we would be able to keep this spirit alive and it would carry on through the generations to come.

2017 International Youth Exchange – Building Peace and Understanding one young at a time.
RVCC Rotaract club students had a great opportunity to discover new culture, and an opportunity to be a truly global citizen as part of the Youth Exchange program with the Rotaract club of New Road, Pokhara. These Rotaractors were sponsored by the Rotary club of Branchburg and the Asha Project, USA-Nepal.

International Youth Exchange – Building Peace and Understanding one young at a time. 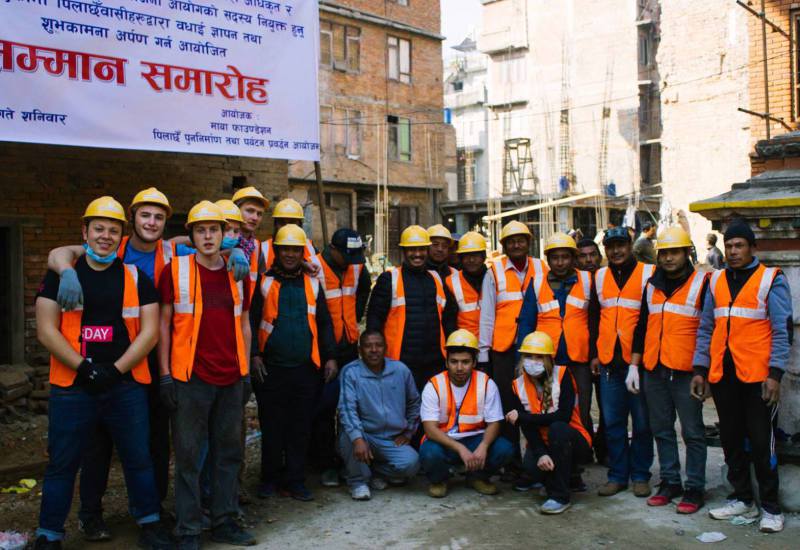 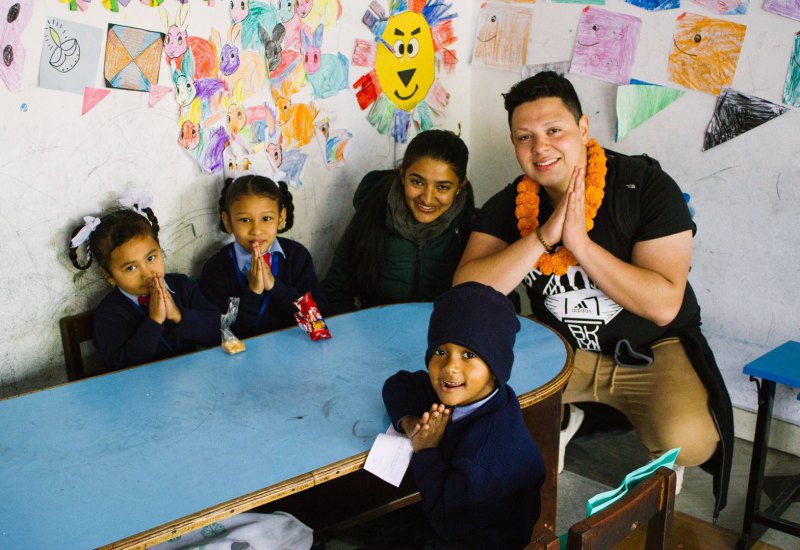 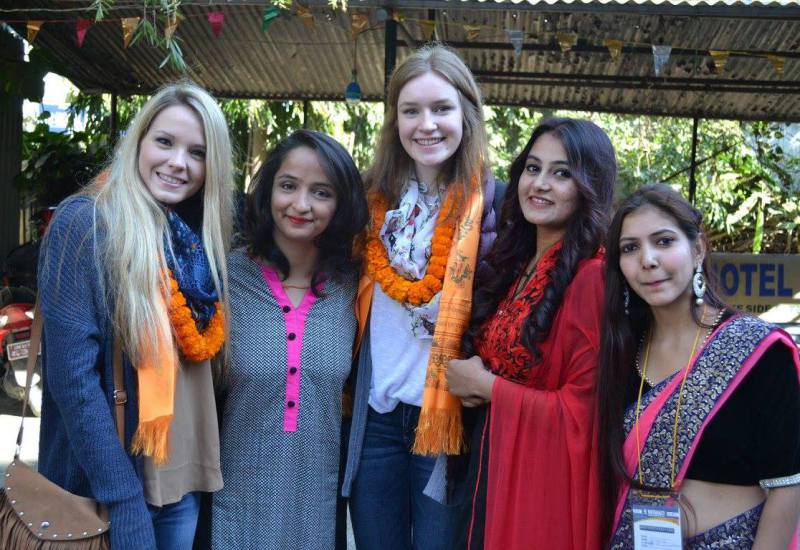